The Story Laboratory’s Virtual Author Library is an online resource center for aspiring authors and bibliophiles. Feel free to wander and check out what the library has in store for you…

The Art of the Feature Interview with Alan DiPerna

One of America’s foremost rock scribes, Alan di Perna has been writing professionally about popular music and culture since 1980. Born in Brooklyn, New York, he came of age during the heady cultural explosion that was the psychedelic ’60s and first emerged as a rock musician and writer amid the exuberant cross-genre hedonism of New York’s early ’80s post punk scene.

Several generations of rock fans and musicians have grown up reading his insightful take on everything from the blues to punk rock to world music in leading music publications such as Rolling Stone, Creem, Billboard, Guitar World, Musician, Future Music, Raygun and many others. His writing about music combines a musician’s technical insight, a scholarly depth of critical acumen, a keen feel for cultural contexts, and an engaging, streetwise style.

Alan’s music recent book is Play it Loud An Epic History of the Style, Sound, and Revolution of the Electric Guitar (Doubleday), which became an inspiration for the Play It Loud exhibition at the Metropolitan Museum of Art, in New York. Met curator of musical instruments Jayson Dobney recruited Alan to write the lead essay for the exhibition catalog.

A longtime yogi and Tibetan Buddhist practitioner, Alan currently resides in the Arizona desert with his wife of many years, Robin. 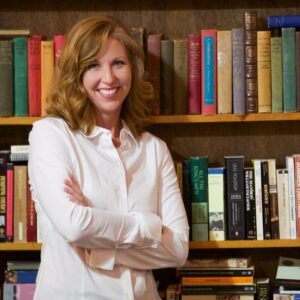 What must an author have when they launch a book? What are the best marketing tools to use? Do you have to be on every social media platform to be successful? Find out with Krista Soukup, the owner of Blue Cottage Agency, a consulting firm for pre-published and published writers. Krista’s specialty is providing authors with the know-how and insights to develop and carry out a comprehensive marketing plan for their published books. Krista’s personalized-approach combines creative marketing strategies with author brand development for maximum visibility, and her expertise spans more than a decade in the industry.

Carolyn Cooke is the author of a novel, Daughters of the Revolution, and two collections of short stories, The Bostons and Amor and Psycho. Winner of the PEN/Robert Bingham Award and a finalist for the PEN/Hemingway Award, her books have been named among the best of the year by The New York Times, The San Francisco Chronicle, and The New Yorker. Her fiction and nonfiction have been published in AGNI, Best American Short Stories, The Nation, New California Writing, The O. Henry Prize Stories, and The Paris Review. She lives in San Francisco, where she teaches in the MFA program at California Institute of Integral Studies. You can find her at www.carolyncooke.com

Alison Luterman’s three books of poetry are The Largest Possible Life; See How We Almost Fly; and Desire Zoo. Her poems and stories have appeared in The Sun, Rattle, Salon, Prairie Schooner, Nimrod, The Atlanta Review, Tattoo Highway, and elsewhere. She has also written an e-book of personal essays, Feral City, and more than a half-dozen plays, including Saying Kaddish With My Sister, Touched, Glitter and Spew, Oasis, and Hot Water.

She performs with the Oakland-based improvisation troupe Wing It! and has given writing workshops all over the country, including at Omega and Esalen Institutes. She teaches memoir at The Writing Salon in Berkeley.